I just needed a few parts. I made a small list of everything I needed. Or so I thought. And maybe just one phone, so I would travel light.
On the 14th of april 2019 I visited the swap meet at the Avoncroft open air museum, organised by THG. I went to the UK the day before, slept on my friend Andy’s couch. The plan was to bring some phones for Andy and get some spare parts at the swap meet. Just one bag would be enough. I like to travel light.

I always enjoy these swap meets and had not visited one for a while. And it would be a great opportunity to get those missing bits for my British phones. I have about 20 of them, with various issues. Not very big issues, only small parts needed, so how could one bag not be enough to carry it all?

So basically I was going to travel light. Take a few phones with me for Andy, and just some parts going home.
At least that was the plan, until Andy offered to swap his red WE 2500 for my green one. A great opportunity! Surely there would be enough space for one phone! And it was a swap too, so my collection would not grow any bigger. Good idea.

So in the weeks leading up to the swap meet I gathered up my British phones and did some research, took a good look at them, tested them, cleaned some of them. A rubber foot missing on my GPO 706, cords for my 200s and 300s, broken dial, dial cards with matching drawer cards, polishing agents, handset: slowly my list grew until I had looked at every phone and I was satisfied the list was complete. Nothing to worry about, it would all fit easily in my back pack: some parts and a phone.

So, after cleaning and testing some of my phones I thought I’d post some pictures of those on facebook and explaining what issues I found. I do that all the time. But not being an expert in every detail of British phones I had not noted a few issues with them, which my British friends helpfully pointed out. So: I needed a different base for my GPO 312 and that bell set on my 248 was totally wrong: I needed a no 39 and not a no 26. Of course the no 39 is not smaller that the no 26 bell set.

Still not a problem. Everything on my list should easily fit in my back pack: some parts, a phone and a bell set.

As I was only going to visit London for a few hours and going to Forbidden Planet for a sci-fi T-shirt, which would not be heavy and would not take up much room, my son pointed out that they have very nice boxes with Pokemon cards too.
My daughter had seen a very nice book on optical illusions, just around the corner at Foyles.
And my wife reminded me that Whittard chocolate shop had that delicious rocky roads cholate drink, the kids loved.

Well, there was going to be plenty of room in my pack, so no worries: some parts, a phone, a bell set, t-shirt, pokemon cards, a book and some chocolate.

Shopping for a few items in London 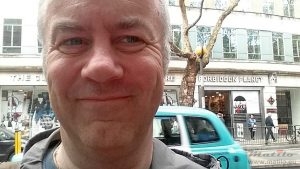 All went according to plan. I visited the shops I wanted, and bought only the things on my list: book, chocolate, pokemon cards and, a t-shirt and I even avoided being tempted at Forbidden Planet to buy some other stuff.

Until I saw this sweet shop and remember my colleagues at work. So I also got a big bag of sweets. Because one extra bag of sweets was not going to make a huge difference, was it?
Parts, phone, bell set, t-shirt, pokemon cards, book and some sweets. That’s it. Just one more shop.

Only 2 tins of rocky roads drinking chocolate was what I needed to get. And then I saw they had a ginger flavoured variant too. Ok, three tins then. My wife would love that.
The cashier smiled at me and said I would probably want a 4th. Yeah, right. I asked him why he thought that. And he explained that if I spent £ 30, I would get an Alice in Wonderland mug for free.
My wife would love that! Alrighty then!
So 2 tins, became 4 tins and a mug. And parts, phone, bell set, shirt, cards, book and sweets. Not too heavy and oodles of room left, right?

I arrived at Andy’s house in good order and we unpacked the phones I brought. Three phones out of my bag, only one phone going in. Very good, and the gifts I bought weren’t too big. So plenty of room for the parts I was going to buy. And Andy had that bell set no 39 for me, which was great!
And then Andy asked me if I was interested in a telephone tester. Say what?
Oh dear, was that going to fit in my pack? Eeeehm, maybe.
OK, what is my situation now? Parts, phone, bell set, shirt, cards, chocolate, more drinking chocolate, a mug, book, sweets and a telephone tester. Still sounds like one bag, right?

Sunday morning we finally arrived at the swap meet. I had a lovely time browsing the tables, chatting with people, taking some pictures. Met quite a few people I had been in contact with on line and now saw for the first time in real life.

Of course I did my shopping, slowly working my way through the list, finding parts I needed and some small parts I did not need. Like these new silvery spades I found for making cords: small parts, so certainly no problem there.
I managed to not find any phones I wanted to buy. At least none that were within my budget. I was shown a lovely rare red wall phone, for example.

So, I had a lovely time, chatting with lots of people, bought some items from my list, cords, bolts, feet, cards, polish agents I really wanted to give a try and I bought some parts not on my list, spades, repro speaking tube, membranes, a manual. Very good, nothing that takes up a lot of room. I even decided not to buy some parts from my list, because of economical reasons.
And oh, there was this box full of various European transmitters for only a fiver. Couldn’t pass that up, of course.

And then I spoke to my friend Jason, which is always nice. Chatted about this and that, bought some cords and then he said he had something for me. Ohoh.
Yes, a very nice Dutch phone, a gift, just the thing for me! And very nice it was too, a Heemaf 1955 wall phone. In good condition, missing it’s handset fortunately (I have plenty of those). Thanks very much, Jason!

Going home with just a little more than a few parts

I went home on the eurostar from St Pancras. A good thing too, as there is no weight allowance and I can take 2 suitcases and one bag of hand luggage. Because as it turned out I did not have one bag on the voyage home. I had two.
A bag of parts, a box of pokemon cards, a book, drinking chocolate, more drinking chocolate, a mug, a kilo of sweets do not fit in my back pack. Rest assured, I really really tried.

Not that it was much trouble carrying it by train from Bromsgrove to London Euston, nor was it much effort to walk from Euston to St Pancras with my back pack and weekend bag.
Taking it with me for 500 km by train to Leiden was not too heavy either. I just stored everything in the luggage rack and sat back and enjoyed the ride in comfort.

However, I took my bike to the station when I left for the UK, so I had to take everything home on my bicylce as well. That was no small matter with this very heavy back pack, with all these parts, a phone, huge amounts of chocolate, and sweets. And not only did I have my back pack, but also that cumbersome weekend bag with that bulky telephone tester in it. It was hard to steer, with all these huge heavy bags! It is a small wonder I did not ride into a canal!

My son was happy with his pokemon cards, my daughter happy with her book, the wife and kids happy with the drinking chocolate and mug. My colleagues were overjoyed the candy bowl was filled again, Andy elated over the phones I brought him and Jason was glad I took that phone off his hands.

And me? I was happy with the few bits and bobs I got: some cords, spades, a dial, drawer front, labels, feet, bolts. I do not need much to be pleased.
And there were those 20 transmitters of course. And the polishing agents, the repro mouth piece, the Viscount manual and that t-shirt.
Mustn’t forget to mention those receiver membranes either. And who could forget that No 39 bell set?