T10-0004HL, maker unknown aka BATPHONE! Yes, this is based on the phone as it appeared in the original Batman television series, which ran from 1966 to 1968. Several versions were used in the series and it was depicted in several locations, such as commissioner Gordon’s desk, the bat cave and Bruce Wayne’s desk at Wayne manor.

Of course the iconic red batphone contributed greatly to the cliché that a hotline should have a red phone. Before this emergency and hot line telephone were seldom red in real life. With the advent of colour movies and colour TV Hollywood depicted these kinds of phones more and more in red, resulting in the classic image of the bright red telephone for these dedicated direct line phones in the public mind. 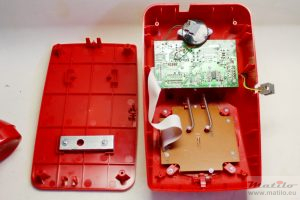 This model was made in China and very very cheaply made. It is made out of thin hard plastic, which gives it quite a brittle feel. It is very light and has very few parts inside. It even has a metal plate inside just to give it some weight.
I had to adjust the spring mechanism that operates the ring covering the number pad. The mechanism was bent slightly, causing it to open very slowly and only partly. 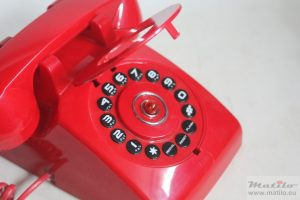 Under the ring with the light in the middle are touch tone keys, so it can be used as a normal telephone. The light comes on when the handset is lifted and blinks on incoming calls. There is a small button under the handgrip that can be used to set the volume of the ringer.

Normally I am not very big on novelty phones. But because this model contributed so much to the stereotypical representation of special telephones like these, I of course had to have one. After all it is thé quintessential red telephone.