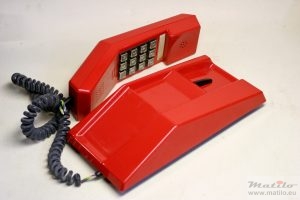 The type Florence was originally a Canadian design by Northern Telecom. It was a development of the Contempra, which got a more compact body shell. The Contemprette, as this model was originally called, came onto the market in the early 80s with a rotary dial as well as with a touch tone key pad.
PTT only had the push button version in their range, in the colours white, brown and red. My specimen is an IDK-version (pulse dialling). According to my information PTT did not have the DTMF version in their product range.

The Florence was not actually made in Canada, but by Telcer in Italy. Even though the Florence was of Canadian origin, PTT marketed it as an Italian design.