A somewhat bizarre and designy telephone, the Eltek Cheops. Made for the Dutch market, it resembles that famous ancient Egyptian burial monument.

Made in the late 80s, early 90s, it has a few electronic features that go with that era. The top has a small light, that flickers on incoming calls. Also of note is the unusual lay out of the keypad. I suspect it took a little time to get used to that. 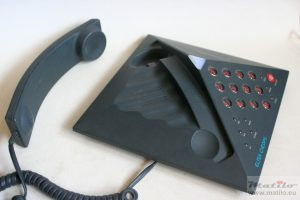 It has an electronic ringer that sends shivers up your spine. It has memory and big red button which activates the speaker phone mode.
And the nicest feature is the hold button, which results in a piece of horrible electronic music that is played to the victim on the other end of the line. Great to use on telemarketeers.