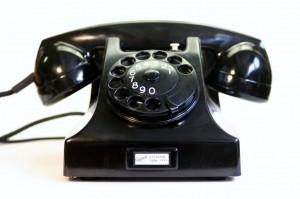 Ericsson was the first manufacturer that came up with a newly designed telephone, that conformed to the Norm 51 specifications. This type is the most produced of the 3 newly designed Norm 51 telephones (the others being the Standard type 1954 and the Heemaf 1955).

You see this telephone, both as the wall version as well as the desk version, often at fleamarkets, marktplaats (a kind of Ebay), etc etc.

These telephones have been exported as surplus material to the USA and other countries, there to be sold as 2nd hand telephones. You can find them all over the world.

What is it called?

Ericsson tafeltoestel/wandtoestel type 1951 is the official PTT name. It was also called CE 51, in accordance with a classification system that was in use by PTT in the 50s for a while. Outside the Netherlands it is sometemes called “RUEN”. This is derived from the mistakenly read logo at the underside of the phone, where it says RIJEN. Rijen is the town where the Ericsson factory in the Netherlands was located. The IJ combination is typical and quite common in the Dutch language, but it often leads to misunderstandings and confusion with people who do not speak Dutch.

The family resemblance with the very first all bakelite telephone by Ericsson, the DBH1001, is unmistakable and the type 1951 evolved from this Art Deco telephone through a number of stages. In 1947 Ericsson redesigned the DBH1001 and introduced the DBH15. Again this was an all Bakelite telephone. The outside was similar to the DBH1001, only with softer lines and an all bakelite dial. The DBH1001 had its electrical components mounted on a frame that was mounted inside the body shell, where the DBH15 had all its components mounted on the base 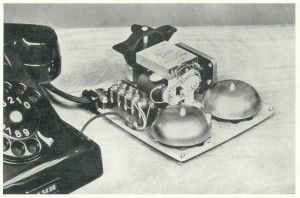 plate in a more or less similar configuration. Ericsson Holland used the DBH15 as a basis for the type 1951. The main difference was the lay out of the electrical components.

Typical for the type 1951 is the shape of the small number window at the front. The length-to-width ratio is typical for the Dutch built version. The others have a slightly higher window or no window at all. Furthermore the cords of the type 1951 run out of the back, while the DBH15 has the cords running out of the side. And there is the handset, which is similar to the F1 handset by Western Electric. They occur often on Dutch telephones, but it can also be found on Ericsson telephones from other countries, albeit sporadically. See also the paragraph on handsets.

Undoubtedly there are even more variants, than I have seen so far. So the overview below is non-exhaustive. 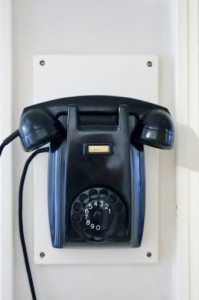 Obviously of course there is a wall model and a desk model. The electrical components are exactly the same, as is the dial, handset and number window.

Most of these telephones are equipped with an earthing button. In this design the earthing button is a small white button, on the top of the body shell, just above the dial. It is made of thermoplastic and the up and down action is provided by the leaf springs of the earthing switch.

The shaft of the button is fitted in a small metal or plastic tube, that runs through a drilled out hole in the housing of the body shell. There are versions which accommodate the button without the extra tube. Probably the ones with the tube are older than the ones which have the position for the button moulded directly in the Bakelite.

Although the type 1951 adheres to the Norm 51, which specifies exactly what terminals are to be used for the dial, handset and line cord, there is a version of the type 1951 that has a different order of the terminals for the line cord. The reason for this is unknown to me and this variant is not very rare.

The bells for the ringer are in most cases painted in a semi glossy black, but also shiny unpainted bells can be found.

There is a version with a lock on the side of the body shell. The lock operated a switch, which connected and disconnected the dial. Unfortunately mine is missing its key and parts of its mechanism.

The first couple of years the type 1951 was in production, it had the older type Ericsson handset. After that it was replaced with a newer model, that is very similar to the Western Electric F1 model. The older type handsets are almost all replaced by that newer model. The newer model is of a less complex design and has caps that are interchangeable with those of other Norm 51 telephones. A type 1951 with an original older type handset has now become very rare indeed.

There are versions of the Ericsson handset with a small amplifier built in. Sound volume can be adjusted with a small wheel at the side of the handset.

Besides the well-known black ones, there is also a white version. Notably these come in a wide variety of shades, and different parts of a single telephone can be of very different shades of white. Many mistakenly believe that there is a white and a cream/ivory version of this model. PTT have offered an Ericsson type 1951 in ivory and on the bottom the model number of this phone is always followed by /W, with the W for white.

Apart from the white ones I have seen a red and a dark green one, but these were unique specimen, perhaps literally one offs. These were never offered by PTT to the general public.

Versions made for private installations lack the PTT logo, just under the handset. They have a circle with the Ericsson Holland logo, moulded in the Bakelite. These often have the older style handset, sometimes without the number card window at the front. Sometimes they have a plastic dial, instead of one made of bakelite.

The Dutch civil defence organisation (BB, Bescherming Bevolking) used an LB version of the type 1951. It had a battery compartment bolted on the back.

The Dutch Railways too used the Ericsson type 1951. Their telephones had the NS-logo, under the handset. That logo came in 2 varieties. There is one with the winged train wheel and one with the simply NS in a circle. Those railway versions are quite rare and highly sought after by train collectors.