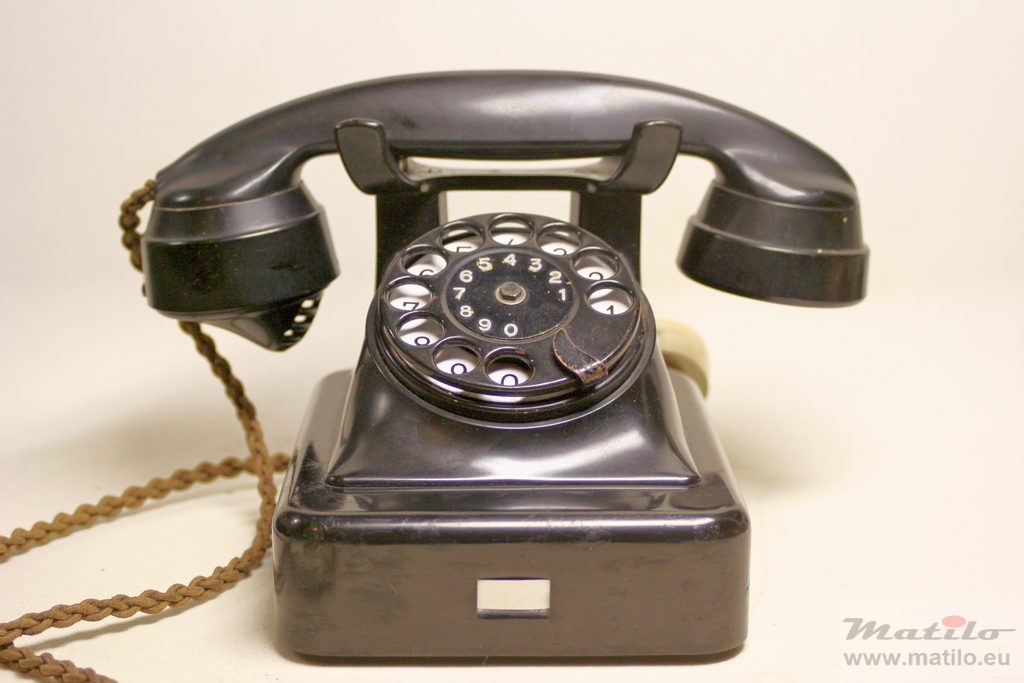 A bit of an odd telephone is this M&G Weltruf, Weltruf meaning world renown. This name seems to come from the way M&G presented itself, with the same word here in this 1930s advert. The fact that this phone has a name rather than just a model number is quite unusual for this era.
There is not much info about it to be found, although the model itself is not super rare. Mix & Genest had a version of the Antwerp phone in production, M&G being part of ITT, when they introduced this design somewhere in the 1930s. When they did that, is unclear. Several dates are to be found, all different.

To me the Antwerp phone seems to be somewhat more modern than the Weltruf, but the book “Telefone 1905 – 1980” by Holger Junghardt seems to say the Weltruf was developed to compete with the W38, which was introduced in 1938.
This would suggest that an introduction date earlier than 1938 is unlikely. Furthermore the Antwerp phone itself was not introduced until 1936, so its successor should be of a later date.

The configuration of the Weltruf is very similar to the Siemens & Halske Modell 27/W28. Metal base with bakelite upper body shell, number card window integral part of the body. This seems to me a bit of a throwback, as most of the models from this era, including the Antwerp phone, have all components mounted on the base plate, to provide easy access for production, maintenance and repair.

It also has a couple of interesting unique features. The base plate is not fastened with screws or bolts and clicks in place with a few tabs.
It has concentric bells, giving the Weltruf a relatively small footprint.
The design of the cradle has an integrated handgrip, with only one small plunger on the left side (check).

I have 2 Weltrufs at the time of writing this article, a normal desk version without earthing button and a multi-line version, which is damaged.

My normal desk top version has a damaged dial, unfortunately, see picture on the left. This design and finger hole distribution is particular to this model, so it is not easily replace. I have made a similar looking dial from Siemens parts, as a place holders, which can be seen in the very first picture.