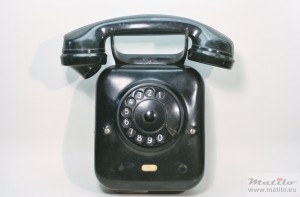 At the end of the 1930s Heemaf modernised their type 1931 telephone. The main difference was that a number of part now were produced by Heemaf themselves. On the type 1931 these parts were bought in from Siemens & Halske and are marked as such.

Because of these the handset and dial were of a differen design on the type 1938. Both are of a newer design, the same as the ones on the Siemens & Halske model 36 from 1936.

Because the handset was of a different design, the cradle was adapted. in the picture on the left you can see the cradle of the type 1938 (left) and of the model 1931 (right).

Also on the Heemaf 1938 slightly finer wires were used on the wiring loom. Electrically the telephone is exactly the same. I could not find any difference on the respective diagrams. Only the type 1938 has a diagram for a 4 wire dial. This telephone remained in production until a newer version was introduced: The Norm 51.