After blog about Comm using my picture and my letter to the managing director I got an email from Adriaan Wagenaar inviting me for a visit to have a talk. Adriaan is general manager for Comm.

So after a few emails to and fro we settled on a date. I took a few hours off from work and made sure I had a charged battery for the good camera this time. My visit to the Houweling Telecom museum last month was less well prepared. See here. 🙂

Coffee and a petit gateaux

So I visited them on November 12th 2018 and I was received not only by Adriaan, but also by Anja Tollenaar, curator of telecommunications. We had a chat about the past events, and they apologised for the whole matter, which was fine. I am glad we got that out of the way. And I must not forget about what we had with our coffee, see the picture on the right, from maison Kelder, a fine and well known pattissier.

Meeting Anja was a big bonus. Her predecessor, with whom I had contact a few times in the past, found another job a couple of years ago and her position was left vacant for a while. I heard a rumour that Comm was considering not fulfilling it again, but apparently they decided otherwise.

Afterwards, Anja gave me a small tour of the museum. They had a huge make over which lasted more than 1 year and they reopened in november 2017. I had not seen the new set up yet, so a great opportunity to have a look around.

We started in one of the depots, this one in particular storing telephone equipment. Just the thing for me as I had seen one of their depots before, in the old set up. Visiting the depot was easier in the past, current policy only allowes access by outsiders only under very special circumstances.
Another thing that was new for me, was the fact that I had to wear gloves this time.

Unfortunately it is no longer allowed to take photographs. We had a long talk about the various phones, other exhibits, telephone history and how we ended up in the world of telephone history.

Above ground: a preview 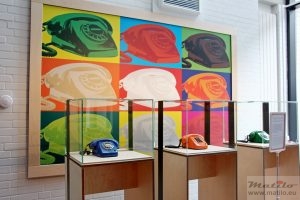 Above ground we went to the telecom exhibit, where I had a quick look around. Only a quick look around, as time was almost up and I was going to pay the museum a proper visit later this year, during the Christmas holidays. I’ll bring the wife and kids next time.
I’ll write a blog about that visit afterwards.

So, we parted ways again, but not before I got 2 books as gift, which was very nice indeed, especially since I like the work of N.P. de Koo very much.

It was a great visit and it was good speaking with Adriaan and Anja. Especially meeting Anja, was for me a pleasant surprise. It is always good to speak with a curator a telecommunications collection.

I will visit them again, probably in the Christmas vacation. I will write a proper blog about the museum itself, after that.

A happy end indeed. And the current picture on the Comm website is great. Much better than mine. 🙂